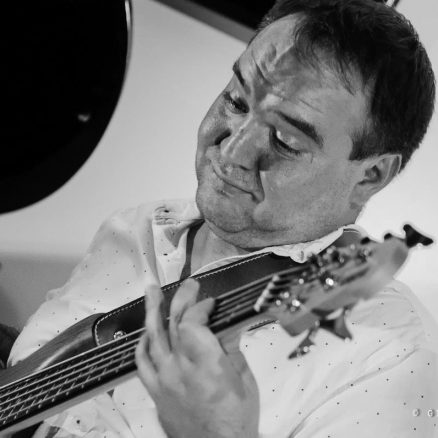 Born in Gdansk, Poland and raised in Hamburg, Germany, bassist Paul Rutschka is responsible
for a solid low end in The Brag Pack. Born into a family of professional musicians, he initially started off as a pianist at the early age of 6, but found the electric bass more suitable as a young teenager, after being introduced to the “Weather Report” group by his parents. Becoming a young adult, Paul’s musical interest moved from Funk, Soul and Hip Hop music towards traditional and contemporary Jazz intrigued by the improvisational factor, a factor that he is often incorporating into his playing style, not being afraid to step outside his role within the rhythm section. Paul is

a winner of the German National Youth Jazz Competition 2005 followed up by performances on festivals and venues across Germany. In the same year Paul moved to Amsterdam to study bass guitar on the Conservatory of Amsterdam where he awarded his diploma. During that period Paul was occasionally touring as a side man within europe, appearing on radio and TV.

Since the early 2000′s Paul focuses also on music recording and production leading to the establishment of P&E Studios, his own commercial recording studio in Amsterdam in 2008. Most recent production credits include the 2010 album “Primavera” by Mundo Sol and Krystyna Stańko’s 2010 album “Secretly” which was awarded with 5/5 stars in the Jazz Forum – The European Jazz Magazine Nov/’10 issue and made it into the top 3 of the polish Jazz charts.